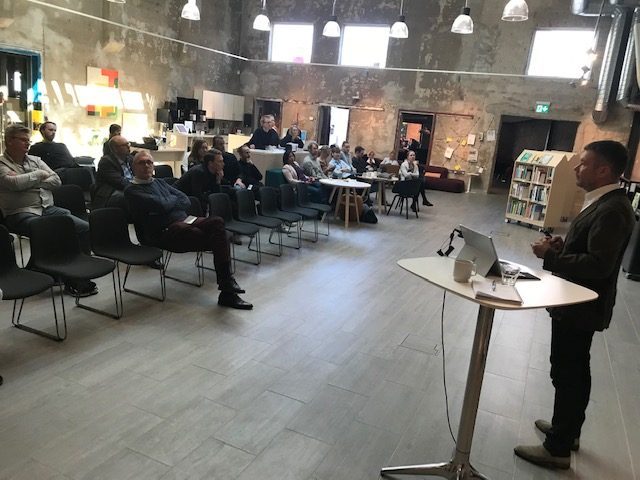 How can we use the latest scenario methodology to increase our knowledge about the ongoing transformation of the energy system? What research from the Mistra Geopolitics program is of most relevans and interest for you?

This was the two main questions we exlored during the one hour lunch seminar at the Swedish Energy Agency on May 8. Apart from a presentation of Karl Hallding on the scenarios the seminar included a dialogue with former Sandvik vice president Peter B Samuelsson and Eva Krutmeijer moderated.

The seminar was attended by some 35-40 staff members of the agency, who themselves had been more or less involved in internal scenario processes leading to the report “Four Futures” (Fyra framtider). Of this reason, the audience was very well aware of what scenarios can be used for, and participated with questions and comments also afterwards.

Peter B Samuelsson pointed out how central the scenario process has been for the Swedish steel industry.

We suddenly received a tool for dealing with the world as complex as it is, he said.

He also emphasized the importance of the scenario work in order to implement a new strategy for the steel industry association (Jernkontoret) and its members. In the transition from a traditional industry to a more progressive and modern one, the scenario process had a very important role to play.

The Swedish Energy Agency is one of the stake-holder partners of Mistra Geopolitics. The agency has an important role in the Swedish energy and climate policy by contributing with facts, knowledge, and analysis of supply and use of energy in the society. It also supports research on new and renewable energy technologies, smart grids, as well as vehicles and transport fuels of the future.

Furthermore, the agency participates in international collaboration with the aim of attaining Swedish energy and climate objectives, and develop and disseminate knowledge for a more efficient energy use to households, industry, and the public sector.

Klaus Hammes, Chief Economist, Swedish Energy Agency and the contact person for Mistra Geopolitics program and has been very active participant in the scenario process, attending several of the workshops.