News
How do we handle several crises at the same time?
July 13, 2022 by Ana Calvo in News

Russia’s invasion of Ukraine has changed the geopolitical situation and the global playing field. Our dependence on fossil fuels and raw materials is clear and multilateral cooperation on climate and environmental issues is affected. These topics were discussed by an expert panel at a seminar in Almedalen, Visby, in collaboration with the Swedish foundation for strategic environmental research, Mistra.

The Vice-Chancellor of the Swedish Defence University, Robert Egnell, is a board member of Mistra Geopolitics. He does not think we understand the challenges we face. This requires more insight and knowledge to be able to act.

“As a security politician, I can add some further crises – radicalization, terrorism, organized crime, refugee crisis and a financial crisis that we are heading into. There are a lot of challenges we must deal with now besides the situation in Ukraine and the climate crisis”, Robert Egnell said.

He believes that these global challenges need to be addressed in global collaboration. The current security policy crisis rather leads to the opposite of cooperation – the Cold War 2.0. Therefore, we now need to think both short- and long-term.

In addition, Henrik Carlsen sees it as deeply unfortunate to boycott Russia from multinational scientific environmental and climate cooperation. He draws parallels to the Stockholm Conference in 1972 and the tense security policy situation then, where the environmental discussions nevertheless became a bridge to act collectively. “We can boycott Russia where it has an effect but not on environment and climate issues”, Henrik said.

We have failed to put a price on carbon dioxide

The current situation with Russia’s invasion of Ukraine also affects the global energy supply. Filip Johnsson considered electrification as a significant part of solving the climate problem. Globally, there has been an incredible expansion of renewable energy. The problem is that the share of the world’s primary energy use since the beginning of the 2000s has been constant at over 80 percent fossil use.

“We have managed to bring in renewable energy, but failed to price carbon dioxide”, said Filip Johnsson, Program Director for the research program Mistra Electrification.

Markus Wråke, who is CEO of Energiforsk and a member of the Government’s Electrification Council, pointed out that the EU is now reducing its imports of Russian oil and gas. But almost as much as China and India’s imports have increased.

Disappointment in the lack of action in Sweden

Regarding electrification in Europe and globally, there is good coherence between the geopolitical agenda in Europe and the climate policy. Markus Wråke deemed that there is a strong driving force to accelerate and sharpen the climate goals. At the same time, many countries are struggling with economic trade-offs right now.

From a more critical perspective, Matilda Machacek brought up that while other countries are raising their ambitions and have active political control to quickly roll out more renewable energy and become self-sufficient,  Sweden has left it up to companies to drive the development forward. To exemplify this she commented that RWE Renewables built its first offshore wind farm in Sweden ten years ago and after that nothing happened.

“I want to see more initiatives from Sweden to address this. We hear a lot from politicians that they have the will and that it should go fast. But there is no overall responsibility to keep this together, it is very divided between different authorities in Sweden. There are many great initiatives, but the coordination is scattered, and the different initiatives come at different points in time, which makes it incredibly difficult to plan. We need a clear and transparent system”, said Matilda Machacek, Development Manager for Offshore Norden at RWE Renewables.

To handle the situation, the panel sees many improvements. Politicians need to make brave decisions, says Robert Egnell, pointing out how quickly measures could be put in place and redirect the financial system regarding both the corona pandemic and the war in Ukraine, but when it comes to the challenges of climate and electrification, we are stumbling. 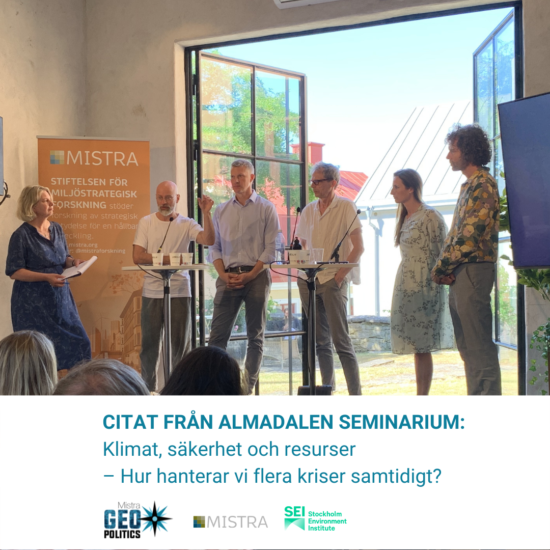 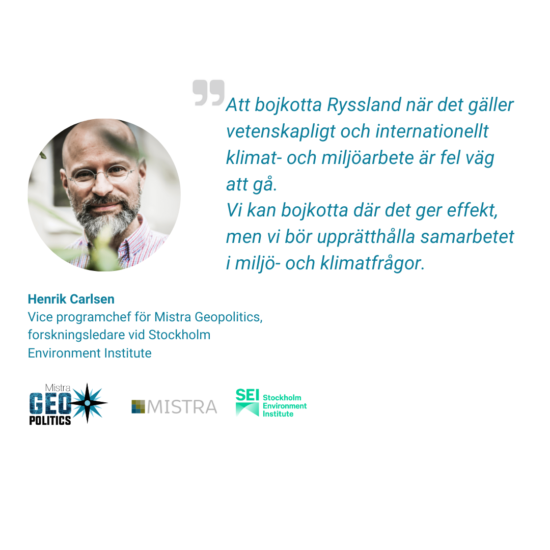 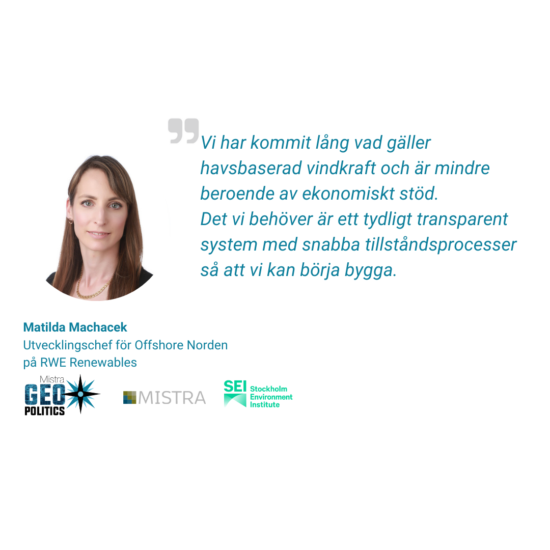 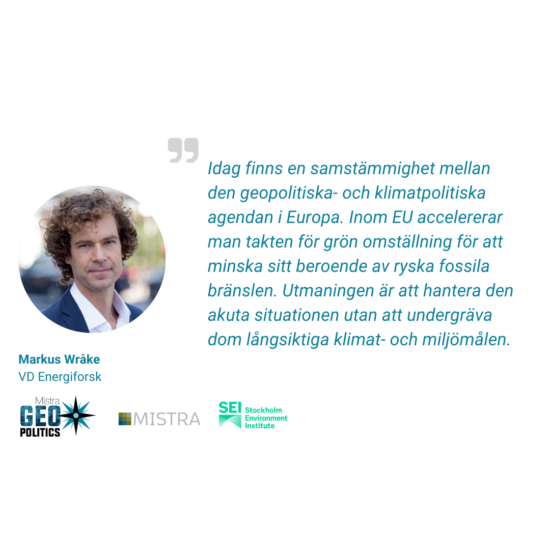 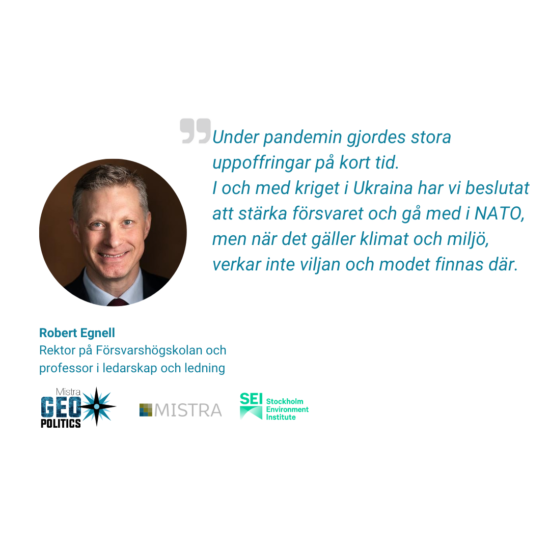 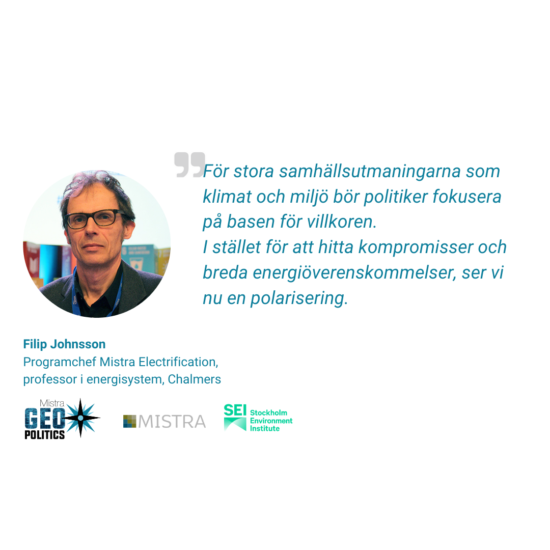 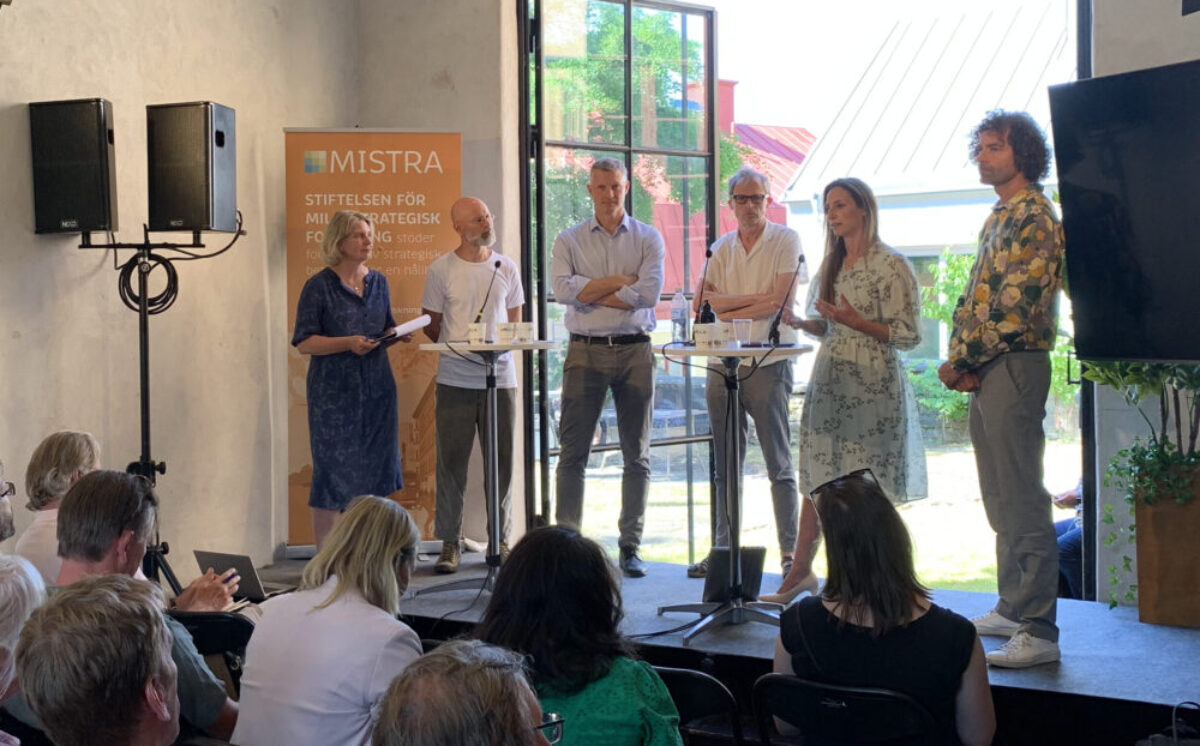 Read about this event

Henrik Carlsen is a senior research fellow at the Stockholm Environment Institute (SEI) and Deputy Programme Director of Mistra Geopolitics. He is an expert on decision making under uncertainty, with an emphasis on climate change adaptation. His research interests are based on the intersection between science and policy on long-term challenges to society. Henrik is a researcher in Work Package 4; The inter-relationships between shifting geopolitical landscapes and the SDGs.

Maria Cole is a Senior Communications Officer at Stockholm Environment Institute (SEI) based in Stockholm.