In place in Trump’s America, from the first parquet in Washington, DC, Malin Mobjörk shares her thoughts on the current climate security debate. Malin Mobjörk is one of Mistra Geopolitics’ leading researchers. Thanks to specific funding from Mistra, she has been able to spend the spring of 2018 at the prestigious Woodrow Wilson Center.

With the election of President Trump in the US, international policymaking is facing dramatical changes and uncertainties. Trump’s friendliness towards leaders in authoritarian regimes, in combination with distancing the US from its closest allies on trade issues and withdrawing from previously signed multilateral agreements, causes a turmoil in the international system. President Trump’s announcement in June 2017 that the US will withdraw from the Paris Climate agreement is one of these decisions, leaving the US as the only country not standing behind the global agenda of reducing greenhouse gas emissions and adapting societies to a changing climate.

Today, the US administration actors that speak most strongly about climate change are some defence actors and the US military. What does this imply for policy making on climate-related security risks?

A burgeoning policy area in international politics is climate security. Ever since it evolved in the early 2000s, the US has had an influential role. What are the implications of the Trump administration on the conversation about climate security and efforts to reduce climate-related security risks? This essay probes into that question, emerging from the present debate in Washington, DC, where I have been a visiting fellow at the Woodrow Wilson Center during spring 2018. Affiliation to the Woodrow Wilson Center, one of the key non-partisan policy forums for tackling global issues in the US, has provided me the opportunity to attend not only public events but also private meetings on the climate security agenda. Overall, these meetings reveal that climate work continues despite the US officially reversing its climate stance. This provides some hope and demonstrates robustness in the administrative system. However, the meetings also disclose that the debate is circumscribed. Today, the US administration actors that speak most strongly about climate change are some defence actors and the US military. What does this imply for policy making on climate-related security risks? Before turning to that question, it is relevant to pay attention to three common features at these meetings. 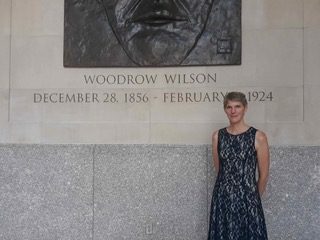 First, it is striking to witness that an entry point to several of the private meetings is the current uncertainty about what policy position the US has and to what degree partners are able to trust the US. The anxieties caused by the disruptive policy making in the present US administration go beyond climate policy and climate security but are salient in these areas as well. Diplomatic dialogue is considered to be increasingly important and crucial for maintaining collaboration. In the climate security arena, the network of climate diplomacy in the EU is mentioned as one such fertile ground, another is the G7’s working group for climate and fragility. However, as the US is about to enter the presidency for the G7’s working group, there are prospects that this group might become inactive or even terminated.

Second, ever since the climate security agenda emerged in the early 2000s, there has been a debate about i) the implications of linking security to climate change, and ii) which security notions are relevant to apply. At the seminars the security approach is based upon a comprehensive understanding of security, which are in line with the IPCC assessment of this research area. Climate change impacts infrastructure and housing, affects food and water security, increases human insecurity, causes tensions and indirectly impacts violent conflicts. This comprehensive understanding of climate security influences the topics discussed. Promoting sustainable development and communities’ resilience across the world is viewed as the best approach to reducing the adverse effects of climate change and supporting stability and peace.

Flying under the radar works temporarily, but collaboration is reduced, competence is lost, development is stalemated, and public debate is constrained.

Third, the US administration under President Trump not only involves an overly climate sceptical discourse, but also the termination of projects, reduction of climate finance, and even a withdrawal of information about climate change on the Environmental Protection Agency’s website. Despite this, US agencies continue to work. However, work on climate change is labelled differently, and publicity is avoided, therefore mitigating the short-term negative effects of the administration’s overhaul on climate action. Nevertheless, the time factor will be critical: flying under the radar works temporarily, but collaboration is reduced, competence is lost, development is stalemated, and public debate is constrained. The US agencies who continue to be most vocal on climate issues are the defence actors. What does this mean for the climate security debate at large?

To link climate change with security has been contested. A key reason for this is how ‘security’ is understood. Security is a plastic concept, in which a state-based approach is complemented by multiple notions of security: human security, societal security, and ecological security to name a few. Scrutinising the research, it is evident that climate change poses various forms of security risks. The security analysis of climate change, therefore, ought to be made from different angles and, furthermore, address the interplay between climate change, fragility, inequality and power dynamics. Altogether, these analyses support a richer understanding of the implications of a changing climate.

Given that policy actors’ analysis and work are shaped by their respective organisation’s mandate, specific policy actors’ analysis of climate-related security risks continue to be informed in this way. When the climate security agenda entered the policy arena in the early 2000s, it originated from defence actors. Given the profound impacts climate change has—for instance on military installations, the context of missions, and the geopolitical landscape—it is understandable that defence actors analyse climate change. Climate change affects their mandate, too.

Nevertheless, the security analysis of climate change should not be limited to the defence actors’ perspectives. It also has to address other dimensions of security, most notably human security risks. The seminar discussions focusing on the US defence and military demonstrated also these actors’ insights that climate change has to be dealt with in a much broader context and that their mandate is limited to certain areas. Partly, the discussion reveals a frustration that the climate change debate now returns to be confined to the military. One participant explained that the reason for why defence and military actors are still able to be vocal on climate change is their strong status in US society; the White house simply has less ability to dictate what the defence actors should do. This development, nonetheless, circumscribes the security framings employed. Moreover, it inhibits a much-needed public debate in the US about the causes and impacts of climate change, and the transformation of societies to a climate changed world.