The Swedish National Expert Council for Climate Adaptation has launched a report to the government regarding a revision of Sweden’s national adaptation strategy. SEI’s Frida Lager has contributed to the report through her work with the Mistra Geopolitics research programme.

Q: How have you contributed to this report?

A: My colleagues and I have been engaging with the experts on this council since they started the writing process about two years ago. The Mistra Geopolitics programme made it possible for us to have informal conversations, participate in workshops, help with examples to the report and bring in our expertise on transboundary or cascading climate risk in many different ways.

Q: Can you explain in simple terms what transboundary climate risk is?

A: For a lot of people, including those working with adaptation, transboundary or cascading climate risk can be a new concept and sometimes a challenge to get your head around at first. I think with Covid-19, we’ve seen many cascading effects also interacting with weather events, causing delays and disruptions in supply chains around the world. And that has made it easier for many to understand.

An interesting example is the global shortage of computer chips that occurred last year, where lockdowns in Asian countries aimed at reducing the spread of the virus there led to suppliers producing fewer chips, combined with a global surge in demand of these chips, simultaneous storms in Texas and fires in Japan and challenges in congested shipping logistics, had dire effects for wide sectors of the global economy, including car manufacturers and the electronics industry. These effects are still being felt today and some predict they will drag on throughout this year, 2022, and possibly longer.

We look at similar effects and focus on climate impacts. Risks from climate impacts cascade through the pathways of trade, finance and investments, people and biophysical flows such as rivers or shared ecosystems. For example, changes in rainfall patterns and extreme weather events have an impact on the production of maize in the US. That climate risk in turn has impacts across the Caribbean, including in Jamaica, which currently sources 87% of its maize production from the US. 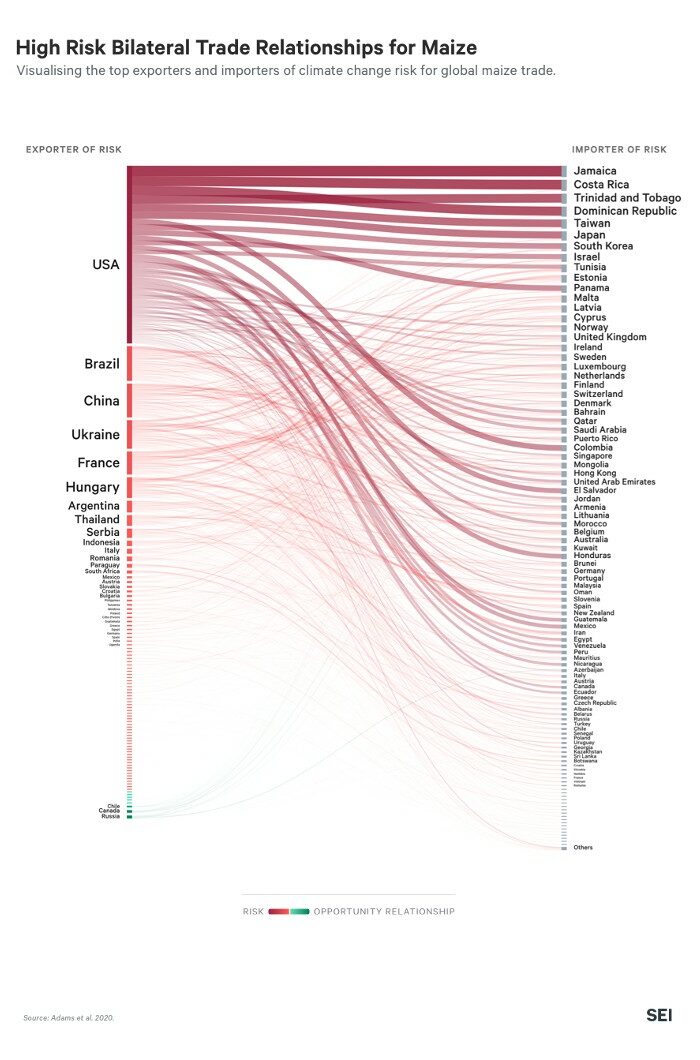 A: For one, taking into account cascading climate risk shifts the understanding of Sweden’s vulnerability to climate risk. At first glance, according to current predictions, we are not as vulnerable to climate risk in our own country as many other countries further south in Europe, but also globally. We also have a high capacity to adapt.

Looking beyond that, Sweden is a small and very open economy. We are dependent on both imports and exports for our livelihoods: At least one third of Swedish jobs are dependent on exports and we import more than half of the food that we eat.

In terms of trade relations, which is something I focus on, we do trade a lot with other European countries that are geographically close and have similarly low vulnerability. However, closer scrutiny of trade data reveals that the later tiers in our supply chains are actually in countries that are very vulnerable to climate change, often with limited resources to adapt.

This is especially true for highly complex supply chains, such as the computer chips mentioned before. The input components and mining of crucial minerals make up only a tiny fraction of the overall costs of the whole chain, but they rely heavily on energy and water supplies and are thus exposed to climate shocks. Another example is Brazilian soy, which is used primarily as animal feed and as such embedded in the food we consume in Sween. Since 95% of all soy in Brazil is rainfed, this production system is highly vulnerable to future drought.

Q: What does this change for how experts and policymakers need to think about adaptation?

A: Adaptation is usually thought about and acted on in a territorial and local context. That includes Sweden, where a lot of the responsibility for carrying out measures to adapt to climate change lies with municipalities or counties, and the focus often is on physical infrastructure. Measures such as flood control are quick to come to people’s minds in the context of climate adaptation. But while this is of course very important, adapting to cascading climate risk clearly goes beyond what any individual municipality can do.

With regard to trade impacts, it can also go beyond what individual companies can do, especially small- and medium-sized enterprises. Even where it would be possible for large Swedish companies to get out of high-risk trading relationships or diversify trading relationships, doing so may lead to outcomes that are not in the interest of Sweden’s foreign or development policy.

Let’s say Sweden and other large European importers of Brazilian Arabica coffee started sourcing their coffee from other countries to avoid importing climate risk, so to speak. This is completely hypothetical because current predictions don’t provide any alternative producing regions with lesser climate risk., But let’s just assume for the sake of our argument here that actors would move to shift imports from Brazil to other places.

That would put the livelihoods of many Brazilian coffee farmers at risk and could lead to regional political instability. In the case of so-called breadbasket products that are essential for food security worldwide, such as wheat, rice and maize, abandoning production areas in climate risky regions may even lead to global systemic effects, food price crises and food shortages worldwide. On the other hand, international cooperation on adaptation would produce better outcomes for everyone.

But this is not only a question of what best serves our self-interest in having for example climate-resilient food systems globally. It is also a question of justice: Given that we in developed countries are those who caused the climate crisis in the first place, important questions should arise with regard to our responsibility as actors on global markets.

Both Sweden and the EU as a whole work on integrating justice and aligning the concept of just resilience into adaptation plans and policy with the aim of “leaving no one behind”, which is the central promise of the 2030 Agenda for Sustainable Development. 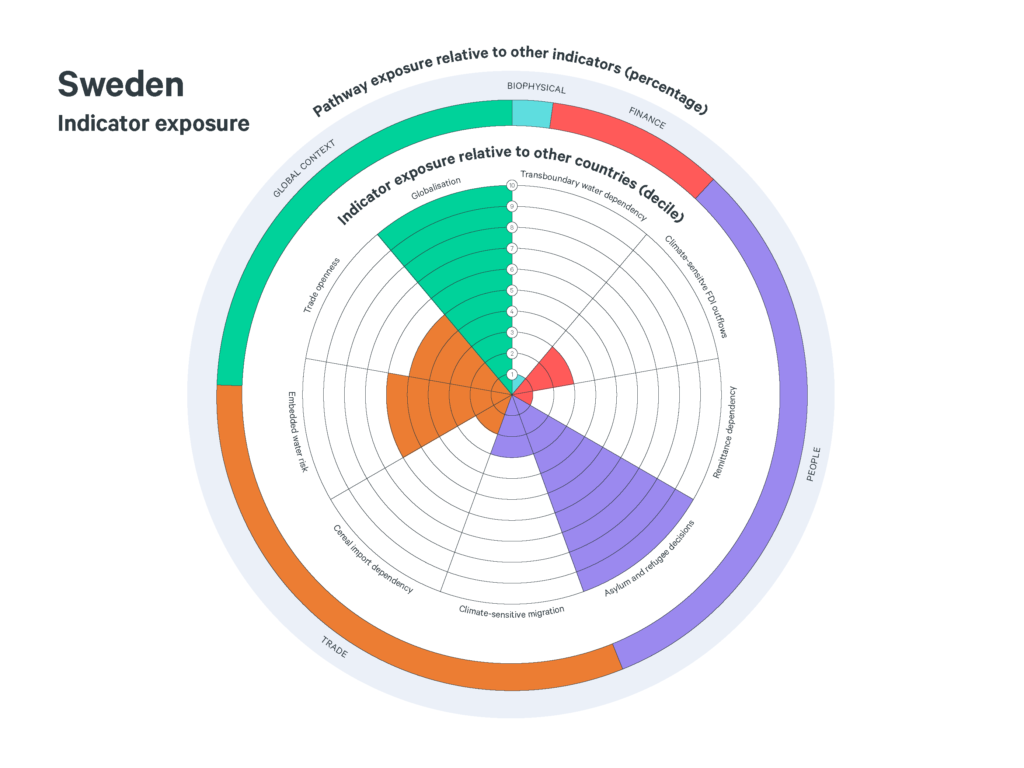 Q: When the Swedish government receives this report from the national experts, what should it do?

A: Compared to other countries, Sweden has been early, really among the first to recognize that transboundary climate risk exists and start grappling with what that means for the country. However, even if it is among the best of the class, we haven’t yet come to a place where we understand these risks, what they can mean, how to act on them and incorporating this risk into adaptation planning.

A first step that the government should take in that regard is to address what we call the ownership of risk. Climate typically falls under the environment ministry, but this type of risk would really need the foreign affairs, development, trade and economics departments to all address it – and address it in a joint and coherent manner.

I think there is a real opportunity here for a country like Sweden, including as part of a joint Nordic effort. These countries that have assumed leadership and been at the forefront on issues related to the environment, equity and global solidarity, and could well be front runners when it comes to understanding and taking action on the issue of cascading climate risk as well.

But this would require a shift in the mindset with which we approach adaptation. Typically, we look at climate risk within the territorial boundaries of our country and approach adaptation with a bit of an engineer mindset and construct sea walls to keep out storm floods and things like that. However, cascading climate risk requires a much more systemic approach and it would be great if Sweden’s next adaptation strategy reflected this.